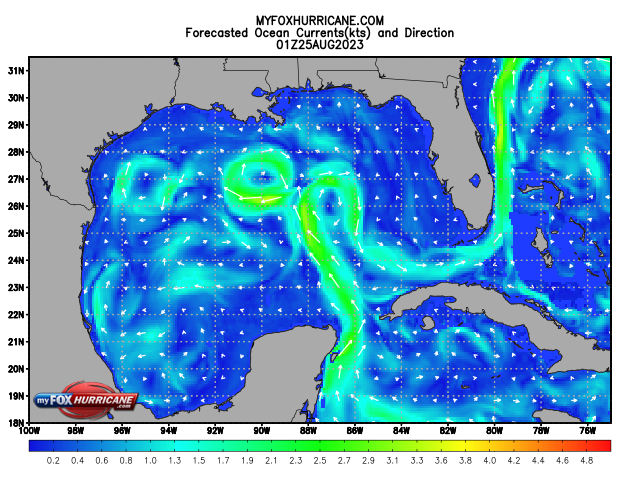 RTOFS is an ocean forecast system based on the HYbrid Coordinate Ocean Model (HYCOM), which is a dynamical model. The model is run once a day. In meteorology and oceanography, the goal of dynamical models is to explain observed circulations on the basis of fundamental physical principles using complex mathematical equations. RTOFS specific goal is to establish high resolution short-term forecasts (approximately 1 week) of the ocean circulations, including eddies and currents. There is special emphasis on determining the location and strength of the the entire Gulf Stream circulation.

RTOFS produces nowcasts and forecasts of sea levels, ocean currents, temperatures and salinity. The model takes into account deep water and coastal waters. The image above is an analysis of the direction and strength of surface ocean currents. The surface current strength is color coded and shows the speed of the current in knots. The fastest currents are depicted in green and red hues and the weaker currents in blue hues. Also, note the smaller circulations, called eddies, which can rotate either clockwise or counter-clockwise. Eddies can be either cold core or warm core, as well.